Last year I wrote a very detailed article about how to date a German and dating culture in Germany. That post still gets quite a few questions from some of my fellow clueless foreigners. So here’s another tongue in the cheek take on top FAQs about dating in Germany and getting married to your SO in Germany.

Marrying Your Partner in Germany

1. How can you marry your German partner in Germany?

In Germany, you can get legally married only at the ‘Standesamt‘ (Registry Office/Registrar). With a lot of bureaucracy, tons of paperwork and stress. But if you are determined here is my guide on how to get married in Germany as an international couple.

2. What are the legal requirements for getting married in Germany as a foreigner?

You should be at least 18 years old and have a valid German resident permit or visa to marry your partner in Germany.

3. What paperwork is required for getting married in Germany as a foreigner?

Depending on your nationality, the required paperwork could be insane. Here is a full list of documents that I was requested to submit (as an Indian citizen living long term in Germany.)

4. WTF is Ehefähigkeitszeugnis and how can you get it?

Certificate of “No impediment to the marriage” aka Ehefähigkeitszeugnis is a document proving your eligibility to get married – that you really are single and have no secret spouse back in your home country (or in the basement!) or anywhere else. Read here more about this document.

5. Is getting married in Germany as a foreigner worth all this effort?

Well, unless you are a sadistic soul who gets off on mental torture (and bureaucratic incompetence) then, by all means, knock yourself out. 😉

As for us, we took one look at the legal and bureaucratic process and promptly said, fuck this, we’ll just get married in Denmark instead. And we did.

6. Wait, what was that about getting married in Denmark?

I have first-hand experience with this aaaand I can highly recommend getting married in Denmark as a foreigner! The ease of arranging the entire event and paperwork was unbelievably efficient.

Here is my step by step guide for preparing your documents and organising your wedding in Denmark as an international couple living in Germany.

At the time of writing this, a Danish marriage certificate is legal in Germany. If you want to be sure, I highly recommend getting an Apostille legalisation of your certificate. Apostille is recognised in the EU and a number of other countries such as India. This gives your marriage an added layer of legalisation.

8. What should you do once you get married to your partner in Denmark?

Here is how it was for us in Bavaria.

Inform your local Standesamt (civil registry) about your marriage in writing. Makes sure to attach your marriage certificate, preferably the one with Apostille stamp. They will send a written confirmation that they have recorded your marriage in their systems.

1. How common are intercultural relationships in Germany?

In a 2017 report by the Federal Statistical Office (Destatis), there were 1.5 million German-foreigner couples living together in Germany. Of those, 1.2 million couples were married. At the time, this figure represented seven per cent of all couples in Germany.

2. Are interracial relationships a thing in Germany?

Yes of course! In western Europe, you are more likely to hear the term cross-cultural or intercultural relationship instead of ‘interracial relationship’. This is because the race of a person does not play a significant role in a romantic relationship as much as the personal compatibility between both partners.

Read more about intercultural relationships in Germany and the cultural and language-related barriers for multicultural couples.

3. What about LGBTQ dating scene in Germany?

I’m a hetero female so no first-hand experience. 😉 But I have met countless LGBTQ couples in Germany in the last 10 years or so. Unless you find yourself in a super conservative part of Germany, you will have absolutely no problems meeting a partner here.

1. How big is online dating in Germany?

It is expected that by 2024, over 7 million Germans will use dating sites to find romantic partners. That is nearly 10% of the entire population.

Read this guide about online dating in Germany and the challenges for non-German speakers often face with them.

I have explained some known issues with German online dating sites here.

3. What are the most popular dating sites in Germany?

Here is the list of some major German online dating sites. You can read the brief description, Trustpilot rating, cancellation policies and membership fees.

4. What about popular dating apps in Germany?

Most popular dating apps in Germany, thankfully, come with simpler membership plans that are easier to cancel. Maybe because many of them are non-German businesses? 😉

Here is a list of most used dating apps in Germany.

You met a charming German. You two have amazing conversations, but they never really express any interest in you or make a move. They only touched you twice! No goodbye kiss, only a hug. They don’t even offer to walk you home, though they ask you to text back when you get back to make sure you’re safe.

American style dating is not a thing in most European countries. If you are an American or from a country with a US-style dating culture, then you will have to leave your expectations at the customs.

Relationships, in general, are more “equal” here; first date bills (and, really, all bills) are split, whoever is interested is supposed to make the “first move” rather than the ladies waiting for the man to do the job.

To an average American, it might seem like Germans move too slow in a relationship. I know a few couples who have been together for 10+ years, with no marriage proposal in sight. And that’s totally ok with both partners. 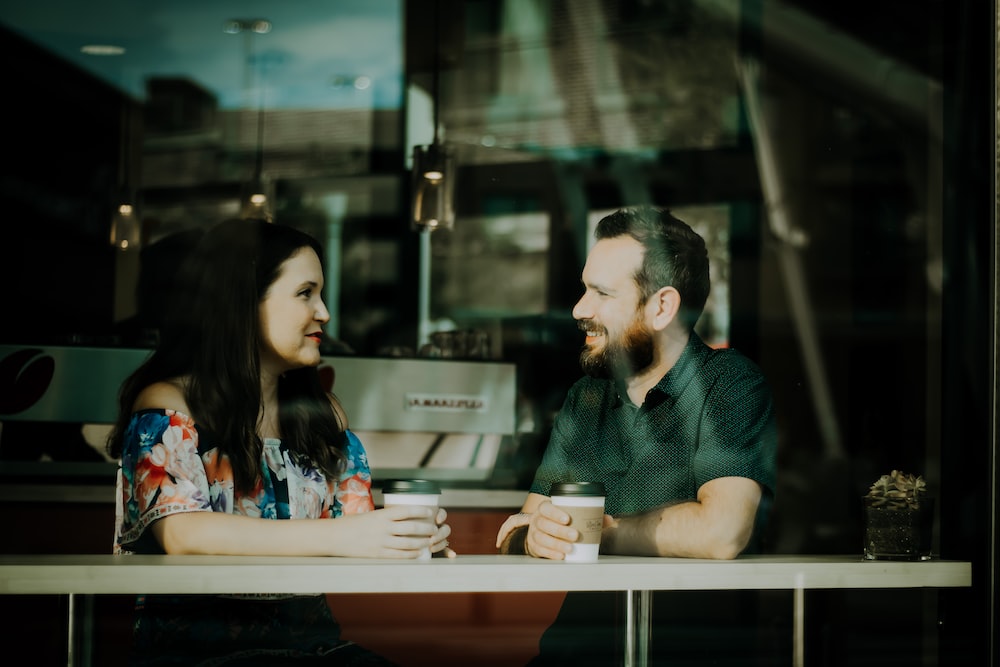 2. How do you flirt in Germany after all?

This is obviously a generalisation, but Germans don’t really flirt much or make the first move. Some Germans may feel very weird making compliments. Others tend to let the other person decide the pace, so they don’t come across as too pushy.

They still show intense interest in you and your life and try to spend more time with you. This is the German way of flirting if you will 😉

3. Why do German guys stare so much?

AKA what’s the deal with the German death stare?

Eye contact is important in Germany. It’s really hard to get used to at first. Especially if you come from a culture where it is considered rude or threatening even.

In fact, a typical German flirting usually starts with a guy giving a subtle glance or smile to a girl. After that, it’s often left to the woman to decide whether or not she wants to come up and chat with the guy.

This illustrates the importance of eye contact in the German culture since you should also try to hold that eye contact while going on a date.

4. How to tell if a German is interested romantically in you?

You basically need to smash your interest with a hammer into their face before they get it.

Here people just hang out together and see where it takes them. So it’s often hard to tell where something is going even between two Germans.

This obviously has the downside of the uncertainty but it also has the upside of being able to test the waters without hurting anyone’s feelings.

There is one cheat code though: Alcohol! The cause of and solution to all of life’s problems.

5. Do German guys kiss on the first date?

There are no dating rituals or rules about kissing on first or any date, unlike American dating culture. You just have to gauge the situation in real-time.

How far away do they stand/sit from you? Less than an arm’s length? – They probably like you (or maybe desperately need human contact :P).

Do they touch you often in platonically acceptable, non-creepy ways? – Maybe they really like you (or just naturally touchy-feely, which is rare for Germans.)

Do you like them? – Well, try cuddling up and see if they don’t bolt out of the door. (or maybe they’re just cold?)

Really like him? – Just kiss them and you’ll know for sure!

6. How do you express love in German?

Ich mag dich – Quite neutral way of expressing when you like someone. Isn’t always romantic but it is still the right direction.

HDL is commonly used in non-romantic relationships, such as between friends, parents and kids, grandparents and grandkids etc. You probably don’t want to hear HDL from your German date.

Ich liebe dich – The classic way to say ‘I love you’ in German. Congrats you landed yourself a German – for life.

Here are some typical German flirting and romantic phrases that you could test on your German crush. 😉 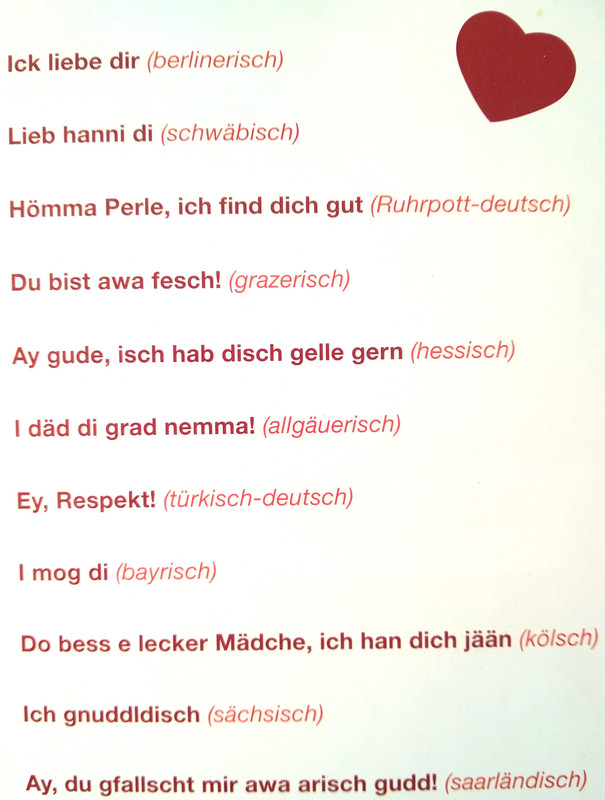