Are you wondering why are German pillows so atrocious? Well, me too! Where the German practicality is when it comes to their pillows. All I get is a bad back! Let’s discuss what exactly went wrong with German pillow engineering in a land famous for…engineering?

Most of us foreigners come to Germany only to be impressed (or overwhelmed) by the infamous German Ordnung, concrete humour, engineering prowess, industriousness at workplaces and a robust social system.

So why are the Ausländers complaining about German pillows?

But seriously, WTF is wrong with these German pillows? How on earth did the world-renowned German engineering fail their pillow designs? For many foreigners in Germany, these pillows are the manifestation of the straw that broke the camel’s back.

These atrocious pillows have been called a lot of things. Here are select few gems:

Most uncomfortable things ever made by mankind

A crime against sleep lovers

Abomination of the bedroom

Note: I can’t take the credit for these glorious descriptions as these are actual rants of sleep-deprived expats living in Germany.

So I sat down to use my client free time in 2020 do some (aimless) research and dig deep into 160 social media comments about German pillows and analysed the most popular opinion and sentiments.

Here are the results of my statistical analysis of “German pillows and their perceived usefulness by foreigners in Germany.” 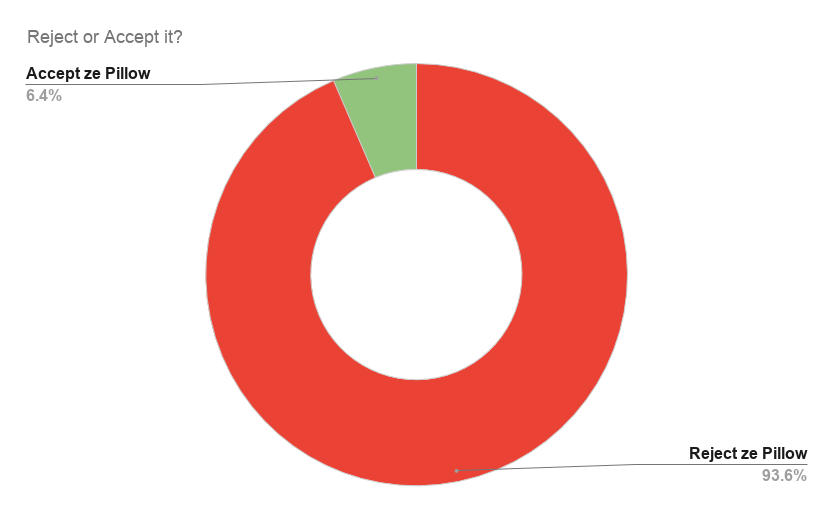 As you can see, a whopping majority of the foreigners downright reject the German pillows. Only a measly 6% of the commenters said they like German pillows or notice no difference at all.

Now we can safely assume from this overwhelming response that the majority of human bodies want adequate spinal support in bed. Then why are these pillows standard in Germany?

Is it really all work and no sleep in Germany? Or is this an undeniable proof that Germans are all closet robots who need no sleep? A proper sleep anyways.

One would be hard-pressed to find a foreigner who willingly wants to take the monstrous German pillows to their bed.

Disclaimer: This blog post may include affiliate links. These links do not cost you anything but I might earn a small commission if you decide to use goods or services from one of my recommended partners. Thank you for your support to help keep this platform growing!

For the sake of context let’s try to understand German bedding situation first.

A typical German bed has two single duvets and two massive, non-supporting pillows that cover half the bed. It is also common to have two single mattresses with a love bridge.

So what is the problem with German pillows?

This is my most hated and ‘hard to adapt to’ culture shocks of living in Germany. As a clueless Ausländerin, these puffy monstrosities have annoyed me right from the first time I laid my head on one of these.

But that is just my opinion, right? What do the other foreigners living in Germany have to say about these pillows?

The pie chart below shows the most common complaints about German pillows design: 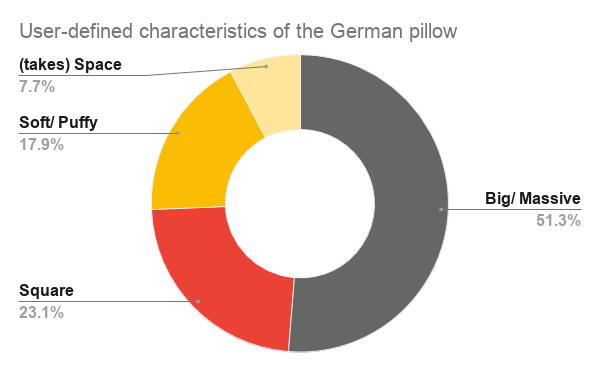 For the sake of brevity, I will combine them into two broadest complaints about German pillows:

They are pointlessly big!

These pillows are a giant 80×80 cm, way larger than a standard pillow found in most of the countries. Some consider them just too big and too wide for normal human head size.

Personally, I see no functional advantage of a square pillow over a rectangular pillow. It is next to impossible to keep the spine in an ideal position all night on them.

They are too soft

The second biggest complaint about German pillows is that they are too squishy and offer no support to your head.

What is the point of these gigantic square puffs that deflate into paper-thin hankies the moment you put your head on them? You may as well be sleeping on your t-shirt.

They are so devoid of filling that my head ends up almost on the mattress and sides of the pillow fluff in on my face to suffocate me. I mean how often does a pillow tries to kill you?

How do we, the Ausländers, feel about German pillows?

We hate them. Unanimously! And I’m not saying it because I hate these pillows.

The word cloud generated based on the 160 comments about German pillow told me so. 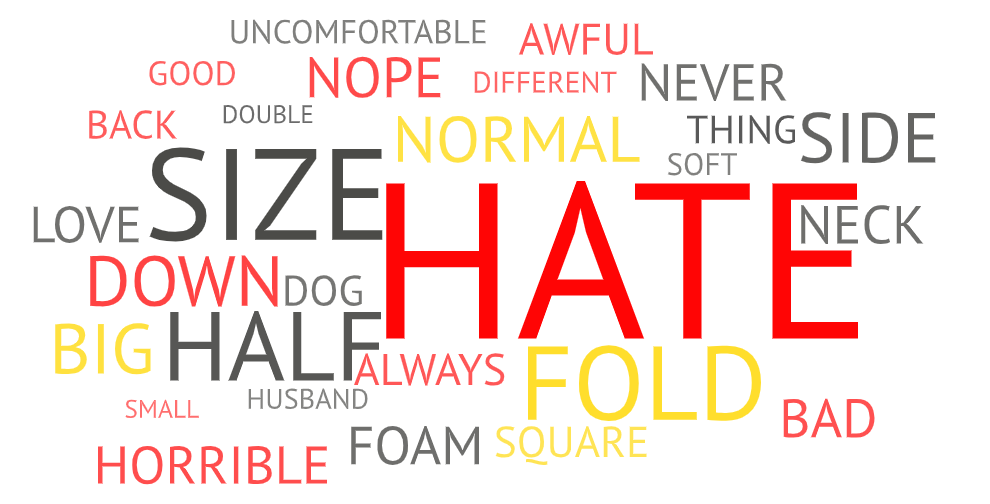 But why do we, the Ausländers, hate German pillows?

Most foreigners report that German pillows destroyed their neck and back over the course of a few weeks and months. Some of us even wonder that these square jokes that dare to call themselves pillows must be torture devices in disguise.

On a personal note, these bloated head packs caused my chronic neck and backaches when I was in the uni. Some days the shoulder pain was so bad that it would travel upwards and evolve into a day-long blunt headache.

My neck still hasn’t forgiven me for the time I took to find a decent ergonomic pillow.

Anyway, here are the body parts most damaged by German pillows according to 160 grumpy sleepless foreigners in Germany. 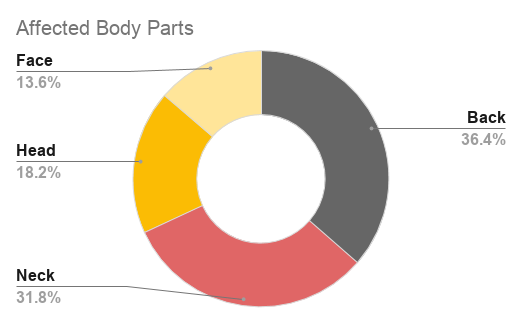 Such a pity that you cannot even get a nice massage to undo this damage thanks to Corona lockdown these days. Here are some at-home massagers that can relieve some pain caused by these German torture devices.

But what do Germans say about their beloved pillows?

How do you use these pillows anyway? Fold them over? Or do you just raise your upper body? What do Germans have to say about these pillows? I found some noteworthy (paraphrased) recommendations on the wild wild web.

You shouldn’t need a pillow at all lying on your back. If you get neck pain when lying on your back without a pillow, you’re probably already suffering back pain and headaches as a result of your poor spine health. Eventually, it can lead to a hump in old age.

These pillows are customisable and you can get extra filling to increase the thickness. If you drool a lot like me, you can keep replacing the filling, it’s cheap as hell.

You are supposed to fold them into half so it stay 80×40. As soon you rest your head on it, the feathers move again, because they want to go back into the 80×80 shape. But they cannot, as your head and shoulders are in the way. As a result, the pillow fits to your sleeping position and keeps your neck and shoulders warm.

What do foreigners have to do to get a good night’s sleep in Germany?

So Germans say you need to fold it into half. And this is exactly what many of us have been doing anyway. At least according to the social media comments that I analysed. 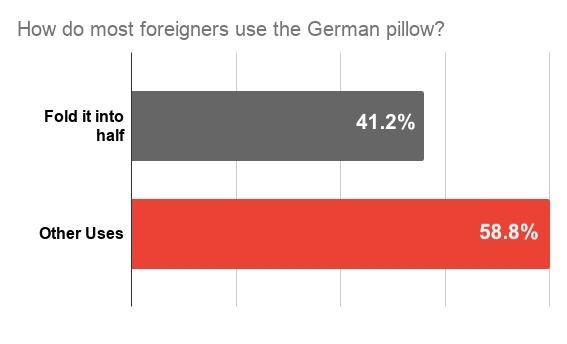 However, every time I fold the pillow, I stay awake and curse all night as it wrestles to unfold under my neck. I’ve concluded that folded, balled up, they’re just insufferable in any form! No amount of rearranging them makes them comfy.

It appears that most of the commenters agree with this. Here is how most of the foreigners deal with the German pillow situation instead of ‘folding it in half’. 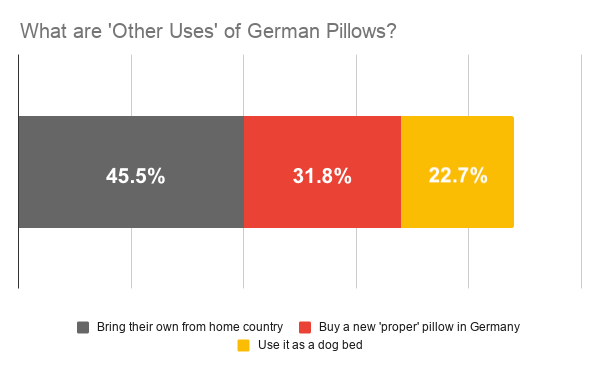 Theories about the existence of German pillows

For most of us, the idea of a pillow is to raise the head and neck and streamline it with the spine. Then why are German pillows so enormous in dimensions and yet SO empty inside?

I present some of my theories:

No matter what spawned these monster size pillows into existence, it’s time to chuck them into the bin.

Some Alternative Uses of German Pillows

Well, now that you already have these abominations in your house you may as well get something out of them. Here are some of my suggestions for alternate applications of a retired German pillow.

Use them for your babies, toddlers and pets

Use them as a dog or cat bed

Use it in your baby’s bed.

Line your babies pram with it during winter

Train your toddler Houdini to use German pillows as escape pods

Repurpose them for creative and household uses

Use them as noise cancellation device when the unruly neighbour doesn’t stop partying until wee hours.

Hide behind them when watching a horror movie

Turn them into a fashion statement

Give it as a present to a good ol’ frenemy

Engage in a pillow fight with your ungrateful toddler

Lastly, rip them apart into oblivion and get yourself a proper pillow

Seriously guys, don’t mess around when it comes to a night of healthy sleep. Get yourself a better pillow.

Do you use a German pillow and woke up this morning with another freakin’ backache? Oh no, knot again! What did you end up doing with your pillow situation? Did you buy a new one or did the German pillow grew on you? Tell us in the comments below?

Enjoyed this post? 🙂 I keep my content ads-free (besides the sidebar!) to make your reading experience as pleasant and uncluttered as possible. If you find my posts enjoyable or helpful, please consider donating a cuppa tea. It helps me BIG time to keep this growing website afloat. Thank you! <3 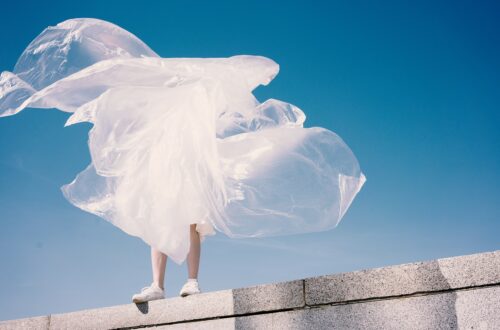 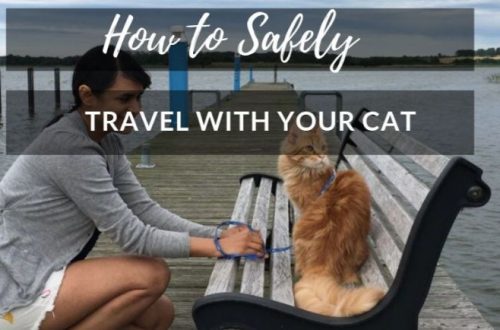 Travel with Cat – How To Harness & Leash Train A Maine Coon

We use cookies to ensure that we give you the best experience on our website. If you continue to use this site we will assume that you are happy with it.OkOpt OutPrivacy policy
You can revoke your consent any time using the revoke consent button.Revoke consent